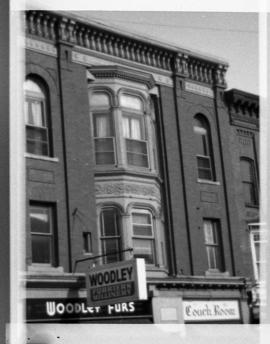 Beth Green was born in Hartney, Manitoba to Reginald J. Mckenzie and Harriet V. Well Wood on 25th January 1924. She married Geoffrey W. Green in 1949. They lived in Quebec and in Fort William (later Thunder Bay) and Clarkson, Ontario and moved to Belleville, Ontario, in 1971. In Belleville Beth worked part-time in the reference room of Belleville Public Library and became a member of the Hastings County Historical Society. She played an active role in the Society's Building Research Committee and chairing the Archives Committee. She died on 6 January 2017.