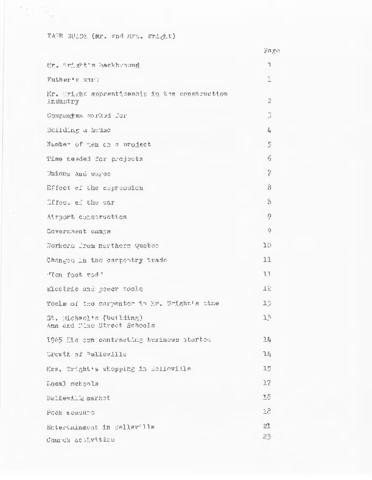 Harold Alfred Wright was born on May 6, 1908 in Tyendinaga, the son of James Alfred Wright and Clara Amelia Parks. He was married to Cynthia Cunningham who predeceased him. Mr. Wright was educated in Belleville and became a self-employed carpenter. He was a member of Bridge Street United Church. Mr. Wright died on June 29, 1997. Officers and Members of both Moira Masonic Lodge #11 and O.E.S. Belleville Lodge #55 held memorial services for Mr. Wright.

Cynthia Jane Cunningham was born in Ameliasburgh Township on March 1, 1903, the daughter of George Cunningham and Cynthia Pierson. She married Harold Alfred Wright and they lived in Belleville. She was a member of Eastern Star #55. She died on January 12, 1995.