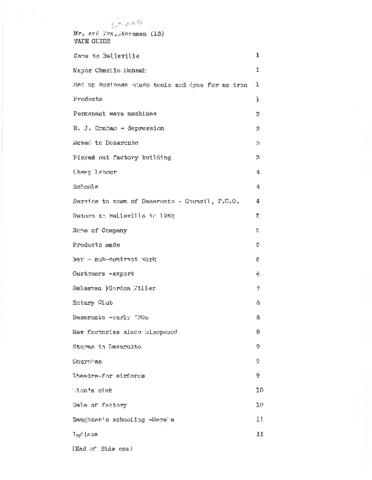 Sigurd Wessman was born in Norway in 1885, the son of Mr. and Mrs. John Wessman. He married Olive Elsie Trueman, and they came to Hastings County in 1921 from Renfrew. He and his brother ran the Belleville Electric and Stamping Co., initially making tools and dyes. In 1932 they moved to Deseronto where the business was called Redi Heat Electric Appliance Co., running to 1964. Mr. Wessman was on the Deseronto town council for two years and served as mayor for five years. During the Second World War the factory produced gear shifts, ammunition boxes and flame throwers. He and his wife moved back to Belleville in 1962. He died on July 12, 1982 in his 97th year.

Olive Elsie Wessman (Trueman) was born on November 14, 1893 in Toronto, the daughter of William Henry Trueman and Margaret Ann Swinarton. She married Sigurd Wessman and they lived for most of their married lives in Belleville and Deseronto. Her husband was a factory owner, producing electric appliances. Olive Elsie Wessman died on April 25, 1987 in her 94th year. Her husband predeceased her in 1982.