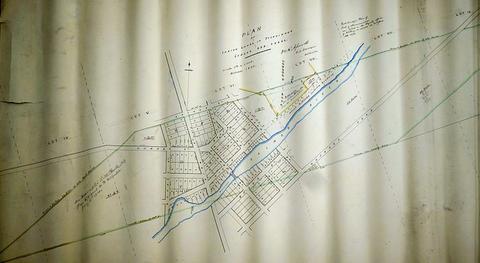 William Robert Aylsworth was born in Ernestown Township, in the county of Lennox and Addington, Ontario on September 15, 1836. He grew up on a farm and was educated in Newburgh, Ontario. At 18 years old, he was employed as a school teacher but later studied surveying. He was articled to A.B. Perry for three years before successfully receiving his certifications on November 8, 1861. In September of 1863, William married Christianna Herchmer, the daughter of Col. John Herchmer. For five years he surveyed private and government land. He was then employed by the Rathburn company for 25 years as a surveyor. In 1871, he was Reeve of Mill Point [Deseronto] and in 1871, 1881 and 1893 Warden of Hastings County. He died in Belleville on April 22, 1909.

An original plan entitled "Plan of Indian Lands in Tyendinaga Leased 999 Years." Surveyed by William R. Aylsworth, O.L.S. of Belleville.
Also written on the plan is "Wallbridge's Plan of Part of Shannonville. Was filed in the Registry Office of Hastings June 21, 1872."