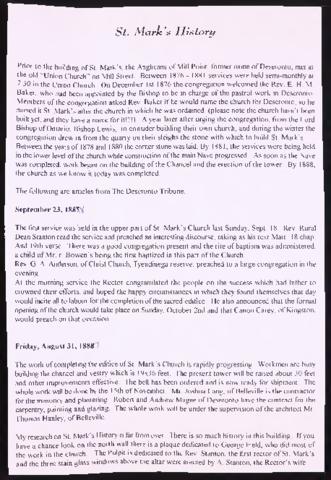 4cm of textual and photographic materials

The Anglican parish of St. Mark’s was founded in Deseronto (the Mill Point) in 1876 under The Rev. E. H. M. Baker and named after his church of ordination in Britain. In 1880 The Rev. Thomas Stanton was appointed the first incumbent of the new St. Mark’s church and, according to Anglican tradition the first ‘official’ service did not take place until the building was nearing completion in 1887. Consecration of the building did not occur until 1892 when the debt for construction was paid off. The church was deconsecrated at the end of 2001 and became a private residence in 2003.

Donated to the Deseronto Archives after the deconsecration of the church in 2001.

Collection consists of the following files:

A plaque commemorating Lieutenant Colin Goss Coleridge was transferred from this collection to the National Air Force Museum of Canada in June 2018.