There is a folder of his municipal papers consisting of: newspaper clippings; a press release from Postmaster M.A. Murray; a program from the opening of the new wing of the Belleville General Hospital in 1956; and a report on major accomplishments achieved by the Haig administration between 1960 and 1963 prepared by City Manager J.R. Reynolds. Additional folders in this fonds include: one folder of federal government papers, nine folders containing copies of his addresses and speeches; one folder of speeches given by other people that the Mayor kept; a folder with copies of the report of the Willmott Royal Commission which looked into the McFarlands hockey team scandal and the City Auditor's report of 1959; one folder of military related documents; one folder with items pertaining to the history of Belleville and Thurlow; a file with printed jokes and other items that Haig found humourous; one folder labeled miscellaneous by the original record keeper; and two volumes of scrapbooks.

File contains a newspaper clip of a letter from the Belleville Cheese Exchange re: Mayor Forrester c.1956. 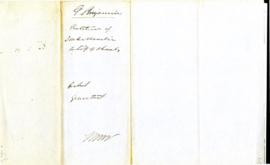 File contains petitions by J.Dunbar Moodie for funds to complete the Grammar School.

Belleville Petition for Inn Keeper to Use Marked Estimate of Sidewalk

File contains a petition by William Martin Jr. requesting the use of the marketplace for a public dinner.

File contains 15 petitions for surveys and roads in the City of Belleville, c.1849-51.

File contains petitions of William Le and 17 other residents of Baldwin Ward asking for another election.

File contains petitions for liquor licenses, including: Thomas Royal for liquor license at reduced cost, C.L. Coleman and 47 others for a saloon license for James Nixon, John Court petition for an inn license, D.S. Vandervoort and 8 others on working on the Sabbath, Thomas Redner petition and Daniel Crysdale petition for tavern license.

File contains 15 sanitation petitions from citizens of the City of Belleville, c.1849-51.

File contains 18 sidewalk petitions from citizens of the City of Belleville, c.1850-51.

File contains toll gate petitions, including: a petition by Joseph Provost and 60 others.

File contains petitions to form a fire department, including: William Rushin and 35 other residents from upper part of Belleville petitioning for independent fire department.

Belleville Petitions for Wells and Water – 1850-51

File contains 11 petitions by citizens of the City of Belleville, for wells and water.

File contains c.1964 newspaper clip on the rivalry between Ontario and Quebec, an advertisement for Canada Day, c.1963 clip on multi-media campaigning in political campaigns.