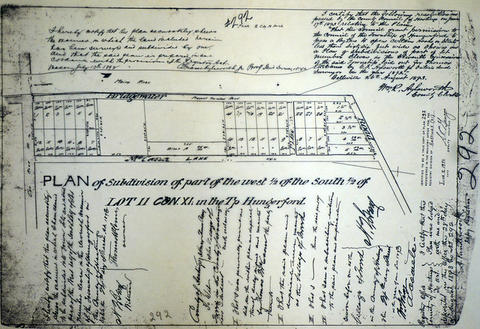 Plan of subdivision of Lot 11 in the Township of Hungerford

Fraser was born on April 21, 1862, at Madoc, Hastings County, Ontario, to parents Elizabeth June Gillespie and Charles Fraser Sr. (a Provincial Land Surveyor).
Following in the footsteps of his father, Fraser was employed as an Ontario Land Surveyor throughout his career.
He married is first wife, Minnie Deans on September 21, 1887 at Perth, Ontario. Following her passing in 1906, Fraser was remarried to Louise Victoria Brenton on March 22, 1910 at York, Ontario.
Fraser died at an age of 77 years on December 4, 1939.

A certified reproduction of the "Plan of subdivision of part of the west half of the south half of Lot # 11, Concession 11, in Township of Hungerford for Thomas McCann, owner.” Surveyed by C. Fraser Aylsworth Jr., P.L.S., and signed July 13, 1892.

This copy was made in 1972 of plan #292, as registered in the Hastings Land Registry Office.

Photographed and available online at https://www.flickr.com/photos/cabhc/48373887721/