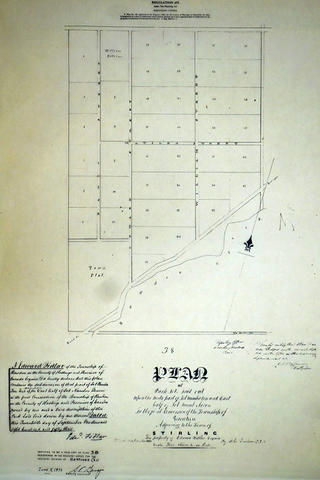 Plan of park lots on Lots 10-11 in Rawdon Township

Emerson was born near Clones, Ireland on January 16, 1799. He learned the skill of surveying at a young age while still in Ireland.
He immigrated to Canada in 1832, settling on a farm in Tyendinaga Township, near Roslin with his sister, Anne. He never married.
Throughout his surveying career, he mapped the counties of Hastings, Prince Edward, Northumberland and Lennox and Addington as a Provincial Land Surveyor. His maps were regarded with great respect.
He died on February 24, 1884 and was buried at the Church of England in Roslin, Ontario.

A certified reproduction of the Plan of Park Lots on the north part of Lot # 10 and east half of Lot # 11 in the 1st Concession of Rawdon Township, adjoining to town of Stirling. Property of Edward Fidlar. Surveyed by John Emerson, P.L.S. in September 1853.

This copy was made in 1972 of plan #38, as registered in the Hastings Land Registry Office.