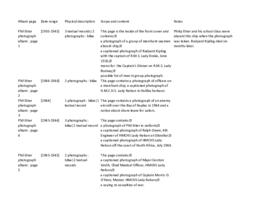 3 boxes of textual and graphic material

Philip Herbert Etter was born in Halifax, Nova Scotia on July 14th, 1924, and later settled in Belleville, Ontario. As a young man he worked in the offices of steamship agents, Pickford and Black. During World War Two he served with the Royal Canadian Merchant Navy. He joined the crew of Her Majesty's Number One Canadian hospital ship, Lady Nelson, a hospital ship, on April 21, 1943 as a Junior Purser and made several Atlantic crossings totalling 160,000 sea miles. They would travel over to the Mediterranean, pick up troops from the battlefields, transport them to England and then take convalescents to Halifax or Montreal. He wrote an account of his time at sea. After the war, Philip worked hard to help get recognition for the veterans who had served in the Canadian Merchant Navy and enable them to be eligible for the same benefits as the Navy veterans. He was the eastern region director of the Canadian Merchant Navy Veterans Association and its representative on the National Council of Veterans Associations in Canada. He died at the Belleville General Hospital on August 6th, 2016.

Collected and/or created by Philip Etter. Donated to the archives by Philip in spring 2012.