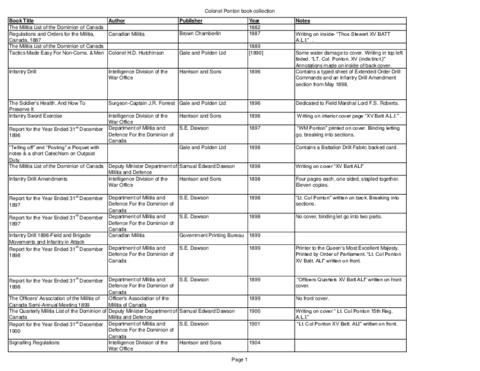 William Nisbet Ponton, born in 1856 at Belleville, Ontario, was educated at Upper Canada College, the University of Toronto, B.A. 1877, M.A. 1878, and Osgoode Hall. He practised law in Belleville where he specialized in the administration of property and estates, and served for 27 years on the Belleville Board of Education in addition to acting as Secretary of the Chamber of Commerce.

Ponton was an executive of the Associated Boards of Trade of Ontario. Registrar of the Canadian Bar Association, President of the Ontario Bar Association, a member of the Council of the Canadian Red Cross, Grand First Principal of the Grand Chapter of Royal Arch Masons, Grand Master of the Grand Lodge of Canada A.F. & A.M., a Fellow and Vice-President of the Royal Empire Society, a Senator of the University of Toronto, Vice-President of the Old Boys' Association of Upper Canada College, and a bencher of the Law Society of Upper Canada. He commanded the 15th Battalion, Argyll Light Infantry, from 1892 to 1901.

List of books made by Nicholas VanExan in June 2015.