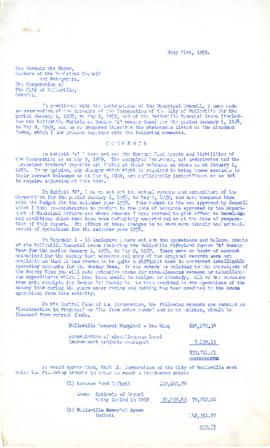 Alexander McLean Haig was a prominent figure in Belleville, Ontario in the mid twentieth century. Known as "Mac," he served as alderman, mayor, and was the President of numerous organizations throughout the city. He was born in Campbellford in August 1903, and died in 1975. His parents were Dr. Andrew Haig and Marian Gertrude McLean. He spent time during his youth in Kingston and attended Queen's University. After he graduated from Queen's Faculty of Arts, he attended Osgoode Hall in Toronto where he received his Doctorate of Law degree.

Upon graduation, he moved to Western Canada before settling in Belleville in 1935, and establishing an insurance business. From 1940 to 1945, Haig served as a group Captain in the Royal Canadian Air Force. After the war, Haig opened Moira Fuels.

His first foray into political life occurred in 1940 when he ran as the Belleville candidate for the federal Liberal Party under Prime Minister Mackenzie King. He ran again in 1945. On both occasions he was beaten narrowly. Haig served as an Alderman for Belleville in 1938, 1939, 1940, 1950, and 1951. He was first elected Mayor of Belleville in 1952 when he won by a record majority of 1626 votes. His second stint came when he received the post by acclamation in 1960. He would be elected two more times in 1962 and 1963. He is credited with leading Belleville out of a financial crisis after the McFarlands World Championship Hockey team was implicated in a scandal with the city's Treasury Department.

He was married to Mary Elizabeth Roberts (1910-2004) in 1941. Together they had four children: Trudi Banting, Christine Cox, Andy Haig, and Archie Haig. His known grandchildren are James Douglas and Alan McLean Banting. Haig Road in Kingston is named for him.

There is a folder of his municipal papers consisting of: newspaper clippings; a press release from Postmaster M.A. Murray; a program from the opening of the new wing of the Belleville General Hospital in 1956; and a report on major accomplishments achieved by the Haig administration between 1960 and 1963 prepared by City Manager J.R. Reynolds. Additional folders in this fonds include: one folder of federal government papers, nine folders containing copies of his addresses and speeches; one folder of speeches given by other people that the Mayor kept; a folder with copies of the report of the Willmott Royal Commission which looked into the McFarlands hockey team scandal and the City Auditor's report of 1959; one folder of military related documents; one folder with items pertaining to the history of Belleville and Thurlow; a file with printed jokes and other items that Haig found humourous; one folder labeled miscellaneous by the original record keeper; and the contents of a scrapbook.