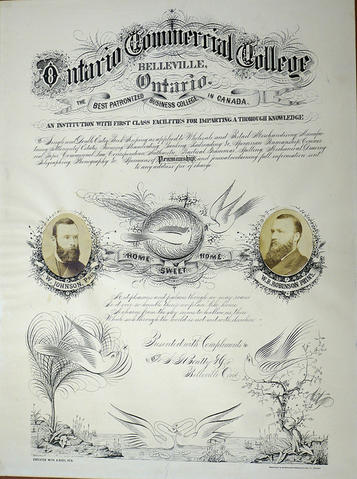 John Wesley Johnson was born in Antrim, Ireland on 17th January 1846. He came to Canada in 1846 and worked for four years as a purser on Great Lakes steamships. He joined the Ontario Business College and was president of that institution for 42 years. He played an active part in politics, becoming a member of Belleville City Council in 1885 and serving as Mayor from 1897 to 1900. In 1908 he was elected president of the Institute of Chartered Accountants for Ontario and also Member of the Provincial Parliament of Ontario. He served as MPP until his death in Belleville on 11th March 1919. In February 1917 he was responsible for introducing the Bill which gave the vote to white women in Ontario.

Donated by Andrew Cadzow in January 2019.

Two certificates and a photograph relating to John Wesley Johnson, President and later Principal of the Ontario Commercial College (later called the Ontario Business College). The photograph is of the Mayor and Aldermen of Belleville, Ontario in the Jubilee year of 1887.