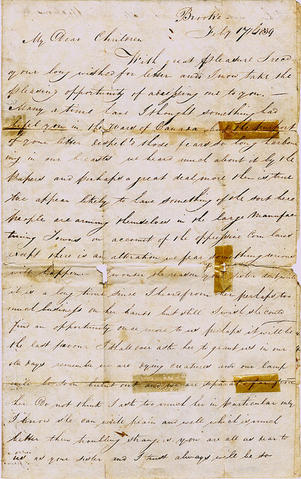 Letter to George Barlow of Belleville

Jesse Barlow married Rachel Parfoot in Brooke, Norfolk, England on 30 October 1792. They had at least eight children: John (born 1793), William, Elizabeth, Susannah, Robert, Hannah, Isaac and George (born 16 April 1814). George moved to Canada before 1839 and farmed 35 acres of land forming part of lot 7 in the first concession of Thurlow Township. He married a woman called Mary Ann and in the 1871 census they had nine children living with them. George died on 2 April 1894 and was buried in the Belleville cemetery. His wife died in 1920.

Donated to the Community Archives by Rob Barlow (great great grandson of George) in May 2011.

Letter written by Charles Harvey on behalf of Jesse and Rachel Barlow of Brooke, Norfolk, England, to their son, George Barlow, of Belleville.