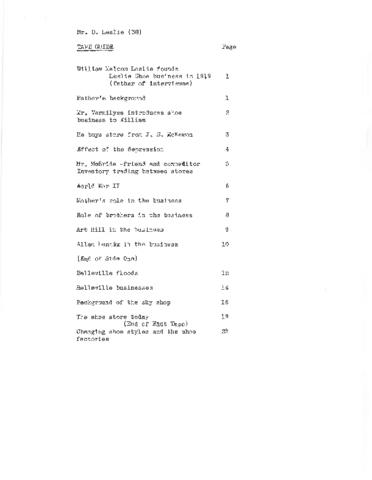 Bryson Leslie was born on July 5, 1920, in Belleville, the son of William Malcolm Leslie and Bertha Jeanette Donaldson. While in England during the Second World War, he married Ardith Everett, a nursing sister. His father founded Leslie's Shoe Store on Front Street in Belleville where Bryson Leslie worked until 1940 when he enlisted in the Canadian Army and was sent overseas to train at Sandhurst Military College in England. Following his training, he received his commission and served with the Governor General's Foot Guard Regiment. After the war, Bryson Leslie returned to Canada and rejoined his father's shoe retail business, later continuing to run it with his brother, Donald. He was an active member of Bridge Street United Church holding numerous positions including chairman of the congregational board. Bryson Leslie was on the board of the Belleville Family YMCA and Salvation Army, past member of the board of governors of Albert College, a past director of the Belleville Cemetery Board and past director of the Canadian Shoe Retailers Association. Mr. Leslie died on June 7, 1991 in Belleville.