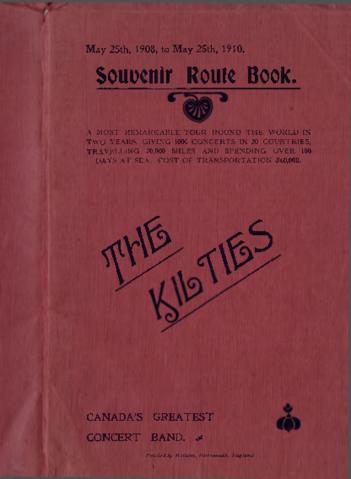 The Kilties Band of Belleville, Ontario, was one of Canada's most popular international touring bands of its day. Thomas P.J. Power and William F. Robinson were its first bandmasters, and its membership at times included cornetist, Mr. Voss, and pipe sergeant, David Ferguson (who also recorded bagpipe solos for Berliner). Playing at parks and touring on the vaudeville circuit, they eventually performed in 20 countries, appearing at the St. Louis World's Fair in 1904 and giving two Royal Command Performances in Britain. From 1908 to 1910 they went around the world, and in 1915 played to great critical acclaim at the Panama-San Diego Exposition.

One of the Souvenir Route Books was donated by the Burlington Historical Society in August 2019 (2019-070).

File contains two copies of “The Kilties: Souvenir Route Book” from 1910 when the Kilties toured the world, a postcard of the Kilties on tour, and paper with the Kilties of Belleville, Ontario letter head. There is also a newspaper article written in 2010 about the history of the Kilties and their tour.