Files relating to the work of the Building Research Committee, including 35mm slides of Belleville, Ontario, buildings, texts of walking tours and files on individual buildings.

Detailed listing:
B/W photograph of Jim and Connie Churchill at their wedding, 1935. 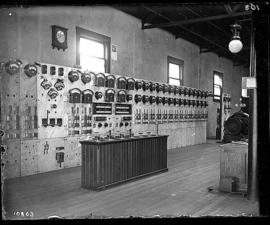 This fonds consists of official records of Trenton, as follows: Council Minutes 1853-1860; and an Assessment Roll, 1887.

Textual electronic files of information used in 27 walks organized by the Architectural Conservancy of Ontario Quinte Branch. These include walks in Belleville, Frankford, Lonsdale, Madoc, Shannonville, Sidney Township, Stirling, Tamworth, Trenton, Tyendinaga, and Wooler. The files give a brief history of properties covered in the walks.

The printed file is for the Lonsdale walk on 16th October 2016.

Records of the Community Archives of Belleville and Hastings County

Materials produced by activities of staff and volunteers of the Community Archives of Belleville and Hastings County.

Records of the Harold Cheese Manufacturing Company, including minutes of shareholders' meetings, financial records and correspondence.