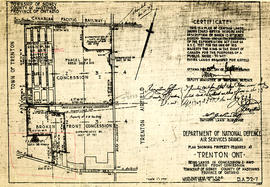 File contains a copy of a plan of the Trenton Airfield and lands taken by expropriation by the Department of National Defence, Air Services Branch, 1949.

A military map of Trenton and Belleville published by the Department of National Defence's Mapping and Charting Establishment. Dated 1978. Scale 1:25,000. 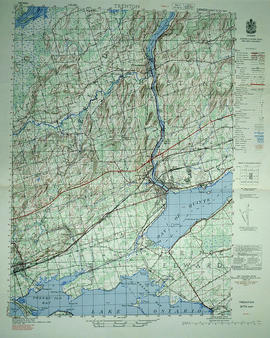 Insets include:
1) legend
2) index to adjoining sheets
3) mean declination
4) grid reference on the sheet and other minor information. 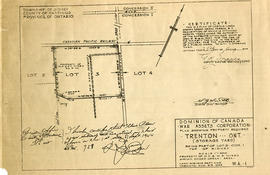 A lot division map of Sidney Township in Hastings County, Ontario. Published by the Department of Land Surveys on August 18th, 1944. Scale: 1=4,000. 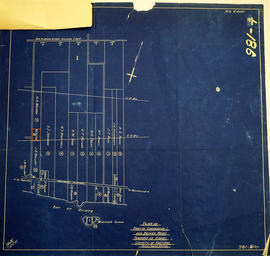 Map of Expropriated Land for Trenton Air Base

A map of Sidney Township, part of Concession #1 and Broken Front, October 18th, 1912. The map details a tract of land expropriated for Trenton Air Base. Scale: 12.5 chains : 1 inch.

Attached is a letter dated May 1st, 1931, The King versus Maitland Hutton and Leda Hutton.

A family history on the Wilkins' family. 2 pages.

File contains newspaper article clippings about Middleton Park and organizations supporting its use in the surrounding community.

File contains newspaper articles and clippings including a Trentonian article on the official opening of the CFB RCAF chapel in 1949, the appointment of Colonel Harold A. Carswell as base commander in 1969, and a upcoming meeting of CFB officers with Governor-General Roland Michener in Canada's Arctic in April, 1969

File contains Sheldon Hawley's oath of allegiance to Queen Victoria in 1842. There is also Hawley family history collected in 1962 about Sheldon Hawley's military career as Captain in the War of 1812, his promotion to Lieutenant Colonel during the Rebellion of 1837-38, and his life in Trenton.

File contains various newspaper clippings published in the Intelligencer in 1969 regarding the Canadian Legion in Trenton and Belleville.