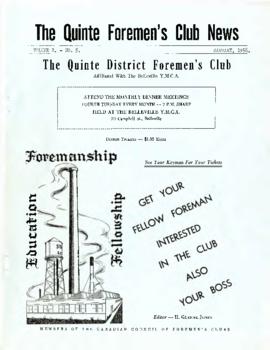 File contains a number of newspaper articles dated between 1956 and 1969 about the Trenton Chamber of Commerce.

The file contains a newspaper article titled "Looking Backward"; it contains the obituary of Jeremiah Gatchell Squier born in Consecon and Fire Chief in 1875 as well as Superintentdent on Murray and Trent Canals.

The file contains a photocopy of the original Royal Letter dated 15-September-1856, granting permission by Queen Victoria to J.W. Dunbar Moodie of Hastings County to establish a Public Fair and Mart in the Village of Shannonville.

The file contains a number of newspaper articles about local events and history of Shannonville. Included are 2 obituaries for 2 local residents; Lemuel E. Mills and J.F. "Ferg" MacFarlane.

File contains a typescript circular letter from Norman J. Banfield, Councillor, Town of Trenton to Trenton schoolteachers regarding instructions for attendance of students and teachers at the Royal Visit, 12 October 1951.

File contains newspaper article clippings about Middleton Park and organizations supporting its use in the surrounding community.

File contains the July 2, 1880 issue of the Daily Intelligencer which recounts the celebration of Trenton's inauguration as a town on Dominion Day, 1880. Includes a brief account of the growth and development of the community.