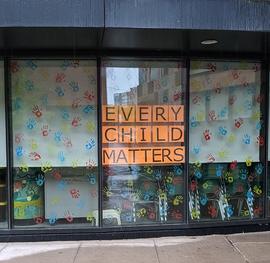 Window display at the Belleville Public Library in the week after the news of a mass grave at the Kamloops Residential School was made public. 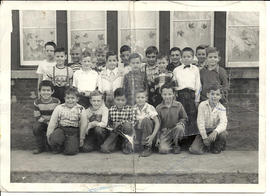 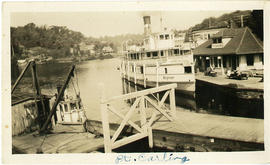 The fonds consists of 633 photographs, 23 negatives, letters, sympathy cards, business cards, newspaper clippings, genealogy and family history and a few business papers belonging to the Smith family, primarily Frank Smith of Madoc. The photographs found in this fonds mainly depict the area around Madoc, with some from Bancroft, Maynooth and other places in Hastings County. A large number of the photographs were taken on vacation or while travelling through Canada and the United States. The photographs were taken in Florida, Atlantic City, Pittsburgh, New Jersey, Philadelphia, Healy Falls, Shaw Falls, Coppercliffe, Ottawa, Port Carling, Gaspe, Napanee, Madoc, Bancroft, Manitoba, Saskatchewan and New Brunswick. There are 3 letters from Henry and Eliza Smith between 1872 and 1874. A birth certificate for Frank Smith, news clippings on the Smith and McCaw families and events in Madoc. There are family trees and other genealogical information connecting the Smith, McCaw and other families. The families primarily depicted in the photographs are the Smith family, McCaw family, Swayne family and Cassidy family. Many of the photographs have names and places written on the back of them. Other people mentioned on the photographs include: Jean Phillips Thompson, Mary Smith Barton, Aunt Vera, Muriel Smith, George Wright, Hugh Pepper, Frank Smith, Frank and Jane Packer Ingersoll, Elizabeth Baker, Martin Porter, Kay Seaton, Helen Whycock, Bessie Woods, Tom Ross, Jack and Ann Yonkers.

Virtual tour of the Belleville Scout-Guide Museum at the Sir James Whitney School in Belleville, Ontario.

Photographs and press clippings (mainly reproductions) relating to the Woodley family and their fur business in Belleville. The store on Front Street was established by George Thomas Woodley (1872-1948) in 1904 and closed between 1986 and 1992. George's son Russell, grandson Douglas and great-grandson Daniel ran the store. Photographs include: George Thomas Woodley [c. 1940] Isobel and Betty Woodley outside the Front Street store in period dress as part of Belleville's Centennial celebrations in 1979.
Also includes Russell Woodley's diary of a 1919 YMCA canoe trip from Lakefield to Sturgeon Lake (and a photocopy of a transcript of the diary), with a flyer for the 1920 trip and a photocopy of photographs from Mrs Thompson, whom the group visited on their journey.