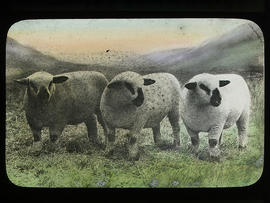 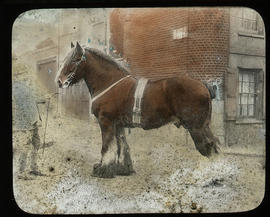 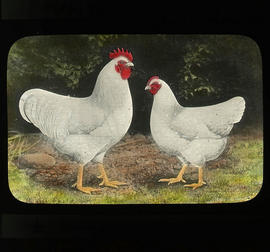 Lantern slides depicting chickens, turkeys and ducks. These slides were produced by the Province of Ontario Picture Bureau, probably in the 1920s, for use in Ontario schools. 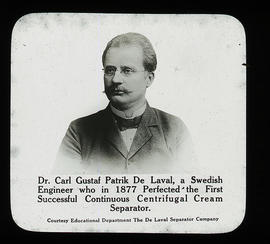 These slides were distributed by Scott & Van Altena of 6 East 39th St., New York, for the Educational Department of the De Laval Separator Company.

Black and white photographs of varying size showing images of harvesting and agriculture. Ostriches, chickens and picking fruit from trees.

File contains a newspaper clipping about auctioneer, Cameron Bunnett (born 1914) taking over as President of the Belleville Agricultural Society and becoming in charge of the fair.

File contains a two-page typescript photocopy entitled "History of the Cheese Industry in the Belleville and Quinte Area [ca. 1864-1964].

File contains a newspaper article on the history of cheese-making in Hastings County particularly the Shamrock Cheese Factory, Sidney Township.

Cheese industry : history in South Hastings / by C. B. Meyers

File contains a four page typescript history of the cheese industry in Central Ontario from 1890-1915 for the Hastings County Museum, as recalled by Chas. B. Meyers, ex-president of the Belleville Cheese Exchange.

First hundred years of Can. cheesemaking

File contains an offprint and photocopy of an article entitled "First Hundred Years of Canadian Cheesemaking," from the Canadian Dairy and Ice Cream Journal, September 1964. Also contains a one page typescript letter concerning the article, and two newspaper clippings about milk and cheese production.

File contains a newspaper clipping of the recollections of John M. Wilkinson, cheesemaker, and a clipping regarding changes in the cheese-making industry.

CheeseProducers Association (and Marketing Board)

File contains the front page of the August 24th 1961 issue of the Family Herald featuring a cider making.

Ministry of Agriculture and Food