The file contains a copy of the announcement flyer for the Hastings County Historical Society celebration of 150 years of railroading (including some information on the Railways of Belleville) along with a copy of the publication Outlook, Issue Number 216, April 2006 with the article "Belleville's Railroad Past Brought To Life".

The file contains a newspaper article titled "Mystery of aviation history solved", about a plane on display in city hall in 1914. The First World War bi-plane was built by H.R. Polly and brothers in Belleville.

File contains a newspaper article from the Intelligencer from Thursday, July 23, 1970 titled “Tidbits of History In Old Newspaper”. It references an old edition of the Daily Ontario dated May 10, 1928 that was purchased at an auction in Prince Edward County.

File contains an invitation from the Warden and Members of the County Council of the County of Hastings to an Informal Dinner at the Hotel Quinte following the formal opening of the new cement highway to Pointe Anne by the Hon. George S. Henry.

A calendar from Fry Ford Sales Ltd. that showcase cars from the year 1921. Includes illustrations. 12 pages.

Copy of a publication by James T. Bell, professor of mining and agriculture in Albert University and Chairman of the Board of Health for the Town of Belleville. 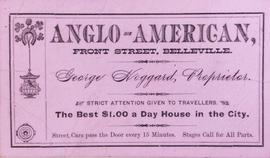 Register of transfers of shares of stock in the Belleville Gas Company.

Pasted typescript pages registering the incorporation, by-laws and minutes of the Belleville Water Works Company. Includes plans of the site of the water works and water tower in Belleville.