Pages from the 9 January 1960 issue of the Toronto Telegram's Weekend Magazine with a story by Frank Lowe on 'The City that went on a Hockey Jag', concerning the debt of $110,000 run up by the City of Belleville in its support of the Belleville McFarlands hockey team between 1956 and 1959. 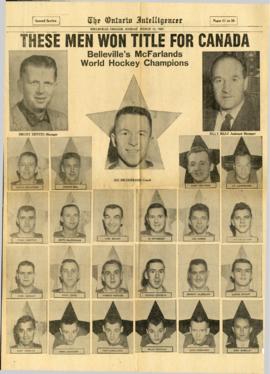