File contains a number of newspaper articles about the local schools in Tweed.

School Examinations with Names and Marks

File contains a typed reproduction of the Entrance Exam results of students in Tweed in 1890. 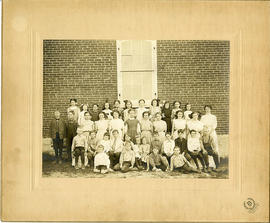 File contains several newspaper clippings on miscellaneous topics related to Tweed, Ontario, including Centennial Year (1967) projects; public efforts to stop the closure and sale of the Tweed High School in 1968; and newspaper photographs of local landmarks.

File contains a newspaper article concerning a ceremony honouring S.Howard Connor, who served 50 years as a teacher and principal at the Tweed Public School