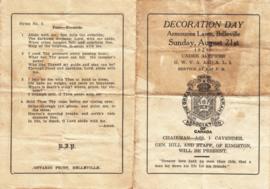 A collection of plans and other items belonging to Don Kellaway:
1) Copy of a plan of docks in the harbour by Victoria Park, Belleville, by Charles Mott, City Engineer, 1954 (copy made in 1974)
2) File with names of owners of private docks in Victoria Harbour, Belleville,1974
3) Poster for Belleville Waterfront Festival and Folklorama, July 1987
4) Six rolled plans created as part of an inventory of waterfront parkland by the City of Belleville, July-September1987
5) Photocopies of City Hall renovation floor plans by Bel-Con Design (five plans: one for each floor), December 1987
6) 'The Ice Age: Harvesting the Ice, 1850-1950', a printed history of the Callaghan family's ice business in Belleville, 2003