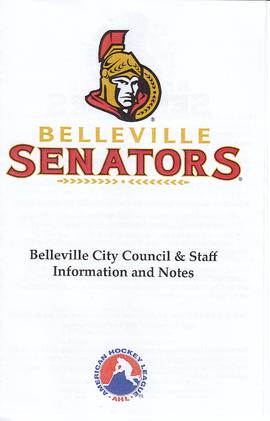 Photograph of 14 team members of the Belleville McFarlands, taken in Prague, Czechoslovakia when the team won the World Hockey Championships. Taken by Foto ČSTV of Prague.

Materials relating to the Belleville Fair and the Quinte Exhibition and Raceway.

Printed program for a hockey game between the Belleville McFarland Oldtimers' Hockey Club and the W.H.A. and N.H.L. Professionals, held on Saturday, 17 March 1979, held as a fundraiser for the Salvation Army Children's Camp at Roblin Lake.