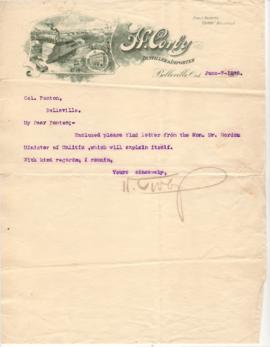 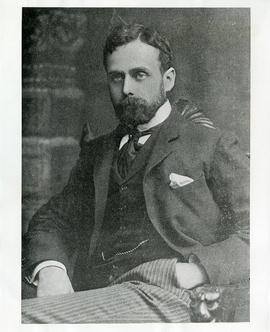 The Gilbert Parker fonds consists of three folders. The first contains pieces of correspondence, primarily to Col. W.N. Ponton. Amoung the items he sent to Ponton were two propogandist pamphlets by Reverend H.M. Gwatkin and William Archer respectively. The second folder contains two of his publications, of which the poem "Was it Some Golden Star" was put to music by Edward Elgar, and two publications directed towards the United States with the aim of bringing them into World War I on the British side. The final folder contains items from the Gilbert Parker Banquet in 1902 with items including a menu and an invitation.

File contains a typescript letter from W.N. Ponton to L.J. Sergeant, General Manager, Grand Trunk Railway of Canada, Montreal regarding a proposed deputation of the Hastings County Council and the Board of Trade to the G.T.R. in Montreal pressing the need for a dining room at the Belleville terminus.

File contains a photocopied newspaper notice of a shareholders meeting of the Belleville and North Hastings Railway Company, 1 October 1878. Also present is manuscript letter from [G. Sergeant] General Manager of the Grand Trunk Railway Company of Canada 29 April 1891 to W.N. Ponton rejecting the extension of a double track at Belleville.

File contains a manuscript letter dated 7 August 1897 on I.O.O.F. printed letterhead, from A. Bates, Secretary, Belleville Branch, Grand Lodge of the International Order of Oddfellows, to W.N. Ponton thanking the latter for making the Armory available for a reception of the Grand Lodge in August, 1897.

File contains manuscript correspondence and corporate reports relating to the Gladstone and Sulphuret Gold Mining Company. Also present are mimeographed copies of a list of lands owned or controlled by W.N. Ponton in north Hastings ca. 1910, and a mimeographed copy of the results of a mineral analysis of Coe Hill, and Madoc area ores

File contains several typescript reports and correspondence concerning the mineral resources and the treatment of ores, including gold, iron, and other minerals found in Hastings County. Also contains a printed prospectus of The Gladstone and Sulphuret Gold Mining Company of Ontario ca. 1881, which had temporary headquarters at Belleville.

File contains a printed list of the item cost for a complete kit for an officers' mess, by Apsley, Pellatt & Co. China and Earthenware Manufacturers, London, England. Also present is a manuscript listing of file items in the W.N. Ponton Papers, 1896-[1908] with brief descriptions of the contents including memoranda, lectures and correspondence.

File contains a photocopied printed list of the officers by rank of the Fifteenth Battalion Argyll Light Infantry from 1863 to 1943.

File contains a newspaper article with a historical retrospective on the formation of the Argryll Light Infantry in response to a perceived threat from the United States during the Civil War.

File contains a printed invitation announcing a talk and photographic display by Frank Yeigh, Toronto, which included photographs of the Argyll Light Infantry in 1899. Also present is a printed announcement of a concert in support of the Canadian Patriotic Fund, held in Stirling on February 27, 1900.

File contains a newspaper describing the departure of ten young members of the Argyll Light Infantry as they left for duty in South Africa in October, 1899.

Masonic : history of the Grand Chapter, 1932

File contains a printed booklet by the Grand Chapter Royal Arch Masons of Canada commemorating the 75th anniversary of the Chapter. Includes a history of the Chapter and photographs of past Grand head officers (Grand Zs) including W.N. Ponton

File contains miscellaneous legal papers including manuscript writs of execution against goods and lands, writs of summons and copies of manuscript and typescript correspondence to the Sheriff of Lennox and Addington County from Belleville barristers and solicitors.