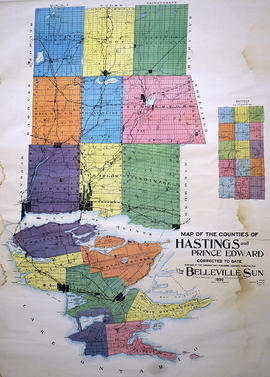 Map of the Counties of Hastings and Prince Edward

A "Map of the Counties of Hastings and Prince Edward." In 1898, the lots, concessions, churches, schools and mines are shown of the townships in Hastings and Prince Edward. Scale: 1.5 miles to an inch. Published by the Canadian Map Publishing Company in Hamilton, Ontario, for the Belleville Sun. Revised by Henry Carre, C.E. Inset is the map of North Hastings, scale 400 chains to an inch.

A certified reproduction of the "Subdivision of part of the east half of Lot # 1, Concession 6, Township of Madoc & partly in Village of Madoc, property of W. H. McBain.” Surveyed by Henry Carre O. L. S., and signed January 13, 1914.

This copy was made in 1972 of plan #454, as registered in the Hastings Land Registry Office.