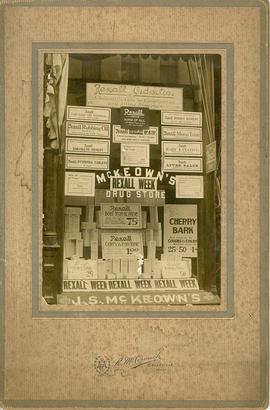 McKeown was born in Belleville in 1871. He was the son of John McKeown senior (a boot and shoe merchant) and Mary Bullen. He married Caroline (Carrie) Lingham on October 5th, 1898 and they had one daughter, Helen, born in 1901. In 1921 the family were living at 16 Alexander Street, Belleville, with a maid called Florence Parks.

McKeown's Drug Store was at this location in Front Street from c.1915 to the late 1960s, when it was taken over as The Coach Room, part of Woodley's Furs. This photograph was found by members of the Woodley family in the basement of the building. 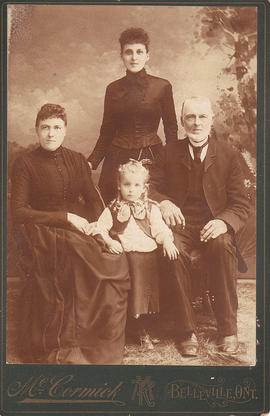 Photograph of two women, one man and a young girl. On back are pencilled notes reading "Mrs Hick, Mr Gilbert, Lottie & Roy, 4 generations".