Two booklets published by the Hastings County Historical Society reproducing an article taken from the first directory of the County of Hastings, 1860-1861 published by Mackenzie Bowell, the Intelligencer Office, Belleville, Canada West, 1860. In the early part of the Nineteenth Century, the village at the mouth of the Trent River was known as Trent Port.

Clippings from Tweed News Circa 1984

This file contains a copy of a school project written by Kim Davidson from Foxboro Sr. Elementary School. It is titled The Great Depression.

Scrapbook on the history of Hastings County, Moira Valley.

This file contains a scrapbook created by Bruce Dobbs on the history of Hastings County, Moira Valley. Articles from the Intelligencer.

This file contains a pamphlet with the itinerary for the 1872 Upper Canada College Annual Games. It has the date of Friday October 4th, of 1872 on the front cover. 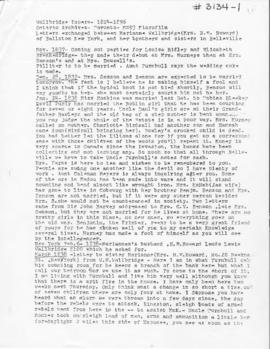 File contains a typescript copy of letters exchanged between Marianne Wallbridge (Mrs. H.E. Howard) of Ballston New York, and her brothers and sisters in Belleville. Transcript made by Lois Foster in July 1979.

The file contains an original Rations Book issued to Will Wartman, Bath, Ontario, during WWII.

The file contains an original note addressed to William Walbridge from William Zwick. The note is dated 1827 in Belleville.

The file contains an original copy of a booklet complied by H.K. Denyes, titled "History of the Zion Hill School Section For the Past Century 1838-1938". School Section No. 15, Thurlow Township.

File contains a number of newspaper articles from the late 50's early 60's pertaining to the local chapters of the Women's Institute, along with a booklet about Adelaide Hunter Hoodless' Homestead, the birthplace of the founder of the Woman's Institute and three annual programes of the Melrose Branch, East Hastings Women's Institute for the years 1948-1949, 1949-1950, 1954-1955.

File contains three programs for the First, Second and Third Annual W.C.T.U. County Conventions, 1910, 1911 & 1912. Also a copy of a newspaper article from 1956 about the 47th Annual County Convention held in Trenton.

File contains original handwritten Annual Reports for the W.C.T.U.: Belleville "Y.W.C.T.U." from 1907 through to 1922, prepared by Miss Maud Reeves, Belleville

File contains various materials pertaining to the W.C.T.U. Belleville "Y's" including a folder with copies of the "Union Battle Hymn", handwritten notes on parlor meetings. An original copy, dated Oct 1, 1907, of The Canadian White Ribbon Tidings referencing the "Busy Belleville Y's". A copy of typed address, titled "Why we need new members for the W.C.T.U. & Y's", prepared by Miss Maud Reeves of the Belleville "Y" for the 1923 Convention at Picton.

File contains a copy of a "Paper on Parlor Meetings for the W.C.T.U." written by Mrs. Williams and dated September 1914. The file also contains other various material pertaining to the temperance movements, such as pledge cards, quotes, Sunday School pledge card, fliers and a prohibition small map of part of the Province of Ontario.
'