This series contains Gerry Boyce's personal financial records and items reflecting his personal life, such as daily logs for the period 1955-1960 and awards for running. Includes a résumé from 2009.

This group of records documents the educational, personal, political, research, and cultural activities of Gerry Boyce from his schooldays onward.

Large political campaign posters for federal, provincial and local candidates, including Robin Jeffrey, Bill Davis, Robert Stanfield. One of the posters is a hand-drawn cartoon of Pierre Trudeau with a lipstick mark on his forehead.

News clippings from the Belleville Intelligencer, report on the news of previous decades. The clippings cover the years 1886-1958 and have been transcribed. 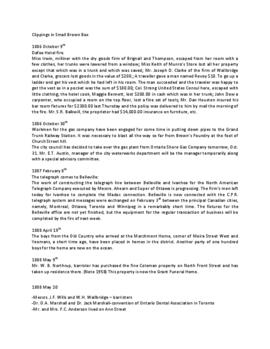 Maps and works of art collected by Gerry Boyce.

Records relating to Gerry Boyce's time as a Councillor for the City of Belleville in the 1990s, including campaign materials, reports, correspondence, clippings, and meeting minutes. The series also holds records relating to the political career of Egerton Boyce, Gerry's son, also a City of Belleville Councillor, and to political activities of Gerry and Bev Boyce from the 1970s to 1990s.