File contains a letter dated 19-April-1887 from F.W. Armstrong (see link for biography http://www.aols.org/sites/default/files/Armstrong-F.W.pdf) addressed to A. Robertson Esq. Ottawa and regarding payment for survey work for the Government in 1882 & 1883. 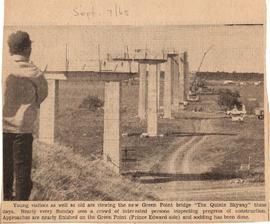 File contains a newspaper advertisement dated 21 November 1961, announcing the candidacy of Benjamin Safe, Chairman of Public Works, for the office of Mayor of Belleville, and announcement on 1 December 1961 of Mr. Safe's withdrawal from the mayoralty contest due to illness.

File contains a newspaper article concerning the closure of the Belleville office of Canadian Pacific Telecommunications, after over a century of operations as a telegraph office under various owners.

File contains an assortment of documents and petitions, regarding roads and bridges in The Township of Cannifton c. 1865.

File contains a newspaper article concerning an early Sulpician mission to the Cayuga First Nation in the Quinte region ca. 1668, and missionization by the Jesuits and Sulpicians among the Wendat(Huron), Mohawk and Oneida in what is now Quebec.

File contains a newspaper article on the coronation of King George V, 11 June 1911.

File contains a typescript letter to Dorothy Sargent from J.R. Ellis, Mayor of the City of Belleville, commending Ms. Sargent's efforts on behalf of the Centennial Year celebrations and enclosing a printed certificate of recognition of service. Also present is a silhouette drawing from the St. Louis Fair, 1904 by E.J. Perry with the inscription on verso : J.T. Sargent.

File contains an Intelligencer article, 6 December 1966, announcing the forthcoming retirement of Elmer “Sandy” Sandercock, deputy-speaker of the Ontario Legislature and MPP (Conservative) for Hastings West since 1948. Also present is a printed program for a Testimonial Dinner in honour of the MPP at the Masonic Temple in Belleville, 8 December 1966.

File contains a manuscript petition by Silvester Fanning to the Warden and Councillors of the County of Hastings for damages incurred to property and expenses incurred in 1857.