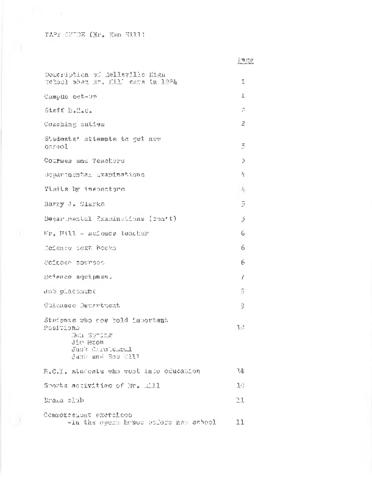 Kenneth Sinclair Hill was born on October 11, 1892 in Melrose, Township of Tyendinaga, the son of James Hill and Charlotte Rollins. He was a high school teacher when he enlisted on December 14, 1915 during the First World War. He served overseas with the Medical Corps attached to the Queen's Own Rifles. Mr. Sinclair lived in Madoc and Pembroke for a few years before moving to Belleville in 1923 where he began teaching science at Belleville High School, retiring in 1957 as vice-principal. He married Jennie Curtis Livingstone on July 8, 1924. He was a member of St. Andrew's Presbyterian Church, serving as treasurer, a member of the board of trustees and in 1950, elder. In 1967 he wrote a short history of St. Andrew's in Belleville from 1821 to 1967 and was awarded a citation of merit by the Presbyterian Church of Canada. Kenneth Hill died on April 18, 1982.