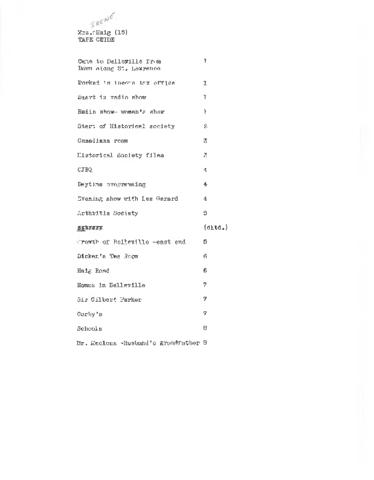 Eliza Irene Haig was born on September 7, 1908 in Morrisburg, the daughter of Charles Seymour and Ella Hummell. She was raised in Morrisburg and Brockville, and later graduated from Queen's University. She married John McLean Haig. She was known as Harriet Stevens to CJBQ listeners and Intelligencer readers. Mrs. Haig spent several years in the children's branch of the Belleville Public Library. She was a member of the University Women's Club and the Business and Professional Women's Club, representing the Canadian Federation of Business and Professional Women in 19159 at the United Nations Commission on the Status of Women. She was a founding member of the Hastings County Historical Society and a member of the Bridge Street United Church Choir. She died on April 15, 2003.