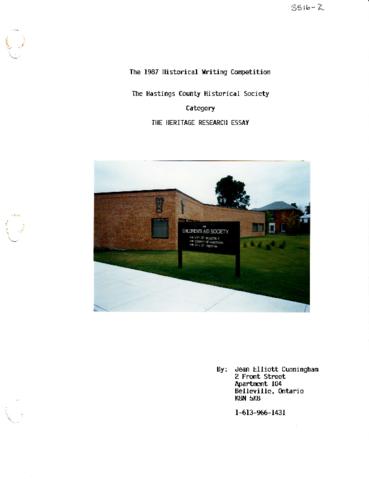 H.C.H.S. Adult Writing Contest. Historical Research. A brief history of the Children's Aid Society of the City of Belleville, Trenton, and County of Hastings

Jean Agnes Elliott was born in Deloro, Ontario where her father (Robert) was the General Manager of the Deloro Smelting and Refining Company and village Reeve. After her father's death in 1944, the family moved to Belleville, Ontario, where Jean graduated from Belleville Collegiate Institute. Jean attended nursing school at Belleville General Hospital. Jean went on a blind date for her BGH graduation with Alexander Cunningham and they were married a few months later on April 6, 1950. They were happily married for 45 years until Alex's death in 1995. Jean joined the Belleville Children's Aid Society (CAS) in 1966, which led to her career in adoption services. Following her retirement from CAS after 26 years, Jean founded Four Counties Adoption Agency, which she continued to own and operate until age 75.