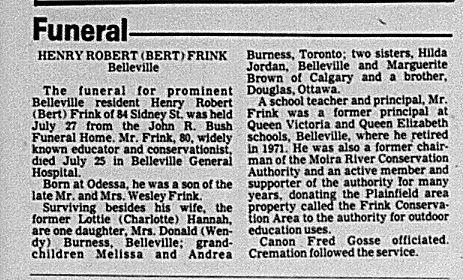 Standardized form(s) of name according to other rules

Other form(s) of name

Henry Robert 'Bert' Frink was born on 20 June 1908, the son of Wesley O. Frink and Sarah Amanda (Storey). He served as a major in the Royal Canadian Artillery in the Second World War. He worked as a teacher and principal in Belleville, retiring in 1971. Bert Frink was involved in the Moira River Conservation Authority from 1959 until his death, and was the chair of the organization in 1979 and 1980. He was instrumental in establishing educational programs for the organization. He donated the land for the H. R. Frink Centre which was named for him and was opened in 1972.

Dates of creation, revision and deletion