The file contains two binders containing photocopies of poems by William James Savage from 1914 to 1964.

A binder of handwritten poems by William James Savage, written 1914-1964, with the last two pages containing an index of poems by title.

Brief notes on the birth, death, and marriage dates of the inhabitants of Glanmore.

History of the Adams family of Madoc, Ontario.

Nine Generations of the VanBlaricom Family

Family tree of the VanBlaricom family.

Note book with recipes, school notes and some accounts.

There is a folder of his municipal papers consisting of: newspaper clippings; a press release from Postmaster M.A. Murray; a program from the opening of the new wing of the Belleville General Hospital in 1956; and a report on major accomplishments achieved by the Haig administration between 1960 and 1963 prepared by City Manager J.R. Reynolds. Additional folders in this fonds include: one folder of federal government papers, nine folders containing copies of his addresses and speeches; one folder of speeches given by other people that the Mayor kept; a folder with copies of the report of the Willmott Royal Commission which looked into the McFarlands hockey team scandal and the City Auditor's report of 1959; one folder of military related documents; one folder with items pertaining to the history of Belleville and Thurlow; a file with printed jokes and other items that Haig found humourous; one folder labeled miscellaneous by the original record keeper; and the contents of a scrapbook.

Account book of the Cadets of Temperance and Jeremiah Simmons

Account of money received at meetings of the Cadets of Temperence 43, 1851-1852, followed by personal account book of Jeremiah Simmons of Trenton, 1852-1865.

Transcriptions of letters from the Hutton family papers.

Volume of transcribed poems with some sketches, compiled by a member of the Ridley family in Belleville, Ontario. 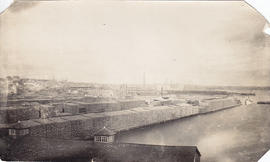 Poster for sale to be held on 28 August 1885 at the home of L. W. Yeomans in Queen Street, Belleville, Ontario.

This series contains Gerry Boyce's personal financial records and items reflecting his personal life, such as daily logs for the period 1955-1960 and awards for running. Includes a résumé from 2009.

File contains research material for Yeomans Genealogy; including excerpts from the 1851, and 1871 Census' for Hastings County. Family names include Yeomans, Osborn, Clapp.