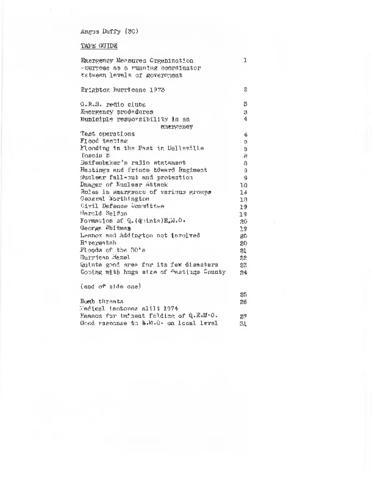 Angus Bennett Duffy was born on July 12, 1914, in Chipman, New Brunswick, the son of Ernest Duffy and Mary D'Aigle. He went to Trenton, Ontario soon after the First World War began. He was educated in Trenton at St. Peter's School and Trenton High School. At the age of 16, he joined the non-permanent active Hastings and Prince Edward Regiment. He enlisted on September 2, 1939 as Company Sergeant Major with Hasty P permanent force, proceeding to England in December of 1939. He was discharged in 1945. Angus Duffy married Helena Bell. He operated Duffy's City Service Station on Front Street from 1946 to 1963. In 1946 he was elected as a Belleville Council alderman. In 1962 he became Emergency Measures Organization (E.M.O.) co-ordinator for Hastings and Prince Edward County. Twenty years later, Angus Duffy was appointed a member of the order of Canada. He died on October 25, 1998 in Belleville. He was buried with full military honours.