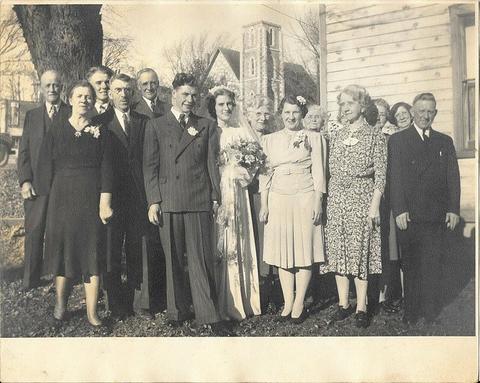 Donated to the Deseronto Archives for by Esther Wood (via Edgar Tumak) in September 2015.

Photograph of Stanley (Stan) McTaggart (1924-2007) and Lalia Histed (1921-2014) on their wedding day in November 1942 at their home on Dundas Street, Deseronto, Ontario. St. Mark's Anglican Church is visible in the background. Stan worked at Gibbard's in Napanee and later was a police officer in Deseronto for five years.

The individuals have been identified as:

Item is available online at https://www.flickr.com/photos/deserontoarchives/21598367168/