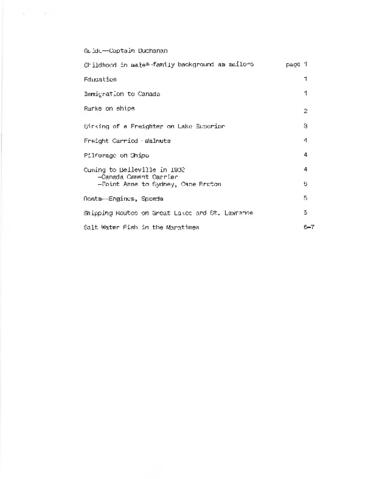 Captain John Albert (Jack) Buchanan was born on April 30, 1896 and died on November 5, 1978. He was the son of Mr. and Mrs. John Buchanan and was married to Pauline Conder. He held a Captain's Certificate for both the Great Lakes and Ocean Boats. His career spanned forty-five years. He was a captain of the Great Lakes Passenger Boats, Niagara Navigation Co., and later Canada Steamship Lines running from Toronto to Niagara-on-the-Lake. He was also captain of freighters running from Halifax to Duluth. His work entailed being captain of the City of Belleville (McCreary Boat) as well as the Glenora Ferry with the former department of highways.
Captain Buchanan attended Tabernacle United Church and sang in the old John Street Church Choir. He was a veteran of the First World War serving with the Canadian Bantam Light Infantry. After the war he entertained the troops as a vocal tenor.
Captain Jack Buchanan was a life member of the Prince Edward Masonic Lodge of Picton, receiving his 50 years Jewel.