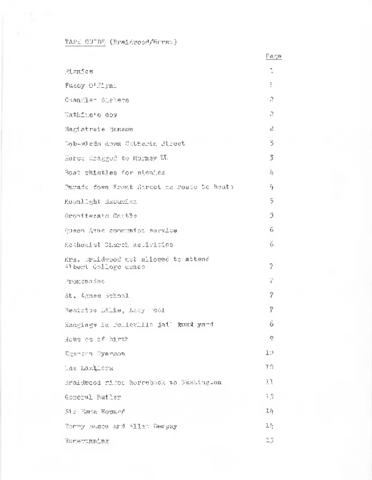 Jack Braidwood was born in St. Petersburg, Russia in 1898, the son of a British engineer. During the First World War his duties included that of Russian translator aboard a Royal Navy aircraft carrier. Following the war, he emigrated to Canada and began building boats in Toronto. He was an avid yachtsman and sailed around the world. In the Second World War, Jack trained as a bomb demolition expert and commanded a high-speed submarine chaser used for coastal command. He married Gwendolyn Lazier of Belleville. They retired to the Quinte area in 1965. In 1975 he established the Jack Braidwood Trophy Race held annually on the Bay of Quinte. He died in 1984.

Gwendolyn Braidwood was born in Belleville on June 28, 1905, the daughter of Stephen Dunbar Lazier and Florence May Lingham. She attended St. Agnes School in Belleville, Bishop Strachan School in Toronto, Belleville Collegiate and Ontario Business College in Belleville. Gwen Lazier achieved fame when she responded to the request of the Belleville mayor, W.C. Mikel to ride a horse to Washington, D.C. to advertise the 140th anniversary of the landing of the Loyalists in the Quinte area. She delivered invitations in towns all the way to Washington, offering one to President Calvin Coolidge on the White House grounds. Her ride was recorded in newspapers in Canada and the United States. Gwen Lazier later worked as a stenographer in Toronto and married Jack Braidwood after the Second World War. They retired to the Quinte area in 1965. Gwendolyn Braidwood died in Belleville on October 5, 2007.

William Nugent Hurst was born in Belleville on June 12, 1908, the son of James Hurst and Mary Nugent. He attended Queen Mary Public School in Belleville, becoming a captain in the school cadet corps. He was a member of the Anglican Young Peoples' Association of Christ Church, the Bay of Quinte Tennis Club and the Kinsmen Club of Belleville, serving as president of each organization. He married Phyllis Louise Wallbridge on September 15, 1936. After enlisting in the Reserve Army with the tank division of the Argyll Light Infantry in 1939, he joined the Hastings and Prince Edward Regiment and the Princess Louise Dragoon Guards in 1941. William Hurst was disabled in 1943 and returned to Canada at both Kingston and London, achieving the rank of captain before his discharge in 1945. After the war, he worked as an insurance agent in Tweed. In 1950 he returned to Belleville as registrar of deeds and master of titles for Hastings County when he pioneered the microfilming of legal documents both for Hastings County and Ontario. Mr. Nugent retired in 1973 when he moved to Wellington in Prince Edward County. He died on August 18, 1989.

Phyllis Louise Hurst was born on March 1, 1909 in Belleville, the daughter of Charles Frederick Wallbridge and Ella Emily Lewis. She graduated from St. Hilda's College, University of Toronto, in the faculty of household science in 1930 and worked at Montreal General Hospital as a dietician. She married William Nugent Hurst on September 15, 1936. After the Second World War Mr. and Mrs. Hurst lived in Tweed for five years, returning to Belleville for twenty-five years after retiring in Wellington in 1973. Phyllis Hurst was a member of St. Thomas Anglican Church in Belleville. She played the organ at the St. Paul's mission church in Belleville for many years. A member of an association of classical musicians, the Presto Music Club, she also worked occasionally as a supply teacher at BCI. Phyllis Hurst died on May 18, 1985, at Wellington.