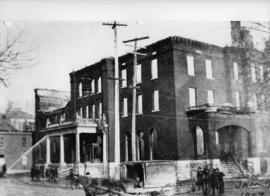 The earliest recorded by-law No. 1 of the newly incorporated police village of Belleville (1836) outlined the fire regulations and safety measures for its residents. Able-bodied men were expected to assist with drawing the hand-pumped apparatus to the scene in all types of weather and bad road conditions. Every business and dwelling was expected to have a bucket to hand and assist with putting out fires.
By the 1860s the town of Belleville had horse-drawn equipment and a steam-powered pumping engine. The independent fire companies were under the direction of the Chief Engineer appointed by the town council. In 1878, a volunteer fire department was organized and the fire companies were merged into two with a Hook and Ladder company. Chief Engineer William H. Campbell was the first fire chief, serving in this capacity until his death in 1915.
The volunteer fire service that had protected Belleville since 1878 was organized on a permanent force basis on January 1, 1916 under Chief William Brown. At this time there were 10 men and two fire pumpers.
The 1920s was a transitional period for the Belleville Fire Department when the city approved the purchase of two motorized vehicles to replace horse-drawn equipment. The last horse was retired in 1926 with the purchase of a ladder truck.
From the 1920s onwards the Belleville Fire and Emergency Services has continued to respond to the changing needs of the municipality.

Donated by the Belleville Fire Department to the Community Archives in May 2016.

Two albums of newscuttings (file numbers 22 and 24) were donated in error and returned to their owner in September 2018.