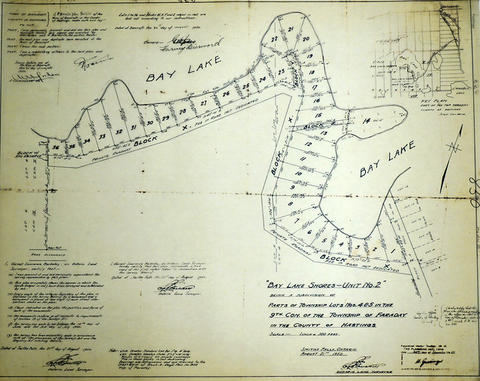 Bay Lake Shores Unit 2 Subdivision in the Township of Faraday

Garnet Lawrence Berkeley was born on May 4, 1890 in Belleville, Ontario, to parents John Alfred Berkeley and Ellen Catharine Zufelt. He married his wife, Gertrude Louise Butler, on June 22, 1912 in York, Ontario. Prior to enlisting in the Canadian Expeditionary Force, he was employed as a land surveyor and civil engineer. On April 1, 1916 he joined the 4th Divisional Cyclists Company as a Captain. At some point in his time overseas, he acquired a hand and knee injury from a motorcycle accident. He was later discharged on November 17, 1917. After the First World War Berkeley returned to his family and previous profession. He died in Smith's Falls, Ontario on 13 August 1967.

Received from Walter I. Watson, surveyor, of Belleville, Ontario, in 2012.

A certified reproduction of the "Bay Lake Shores- Unit No. 2...subdivision of part of Lots # 4 and 5 in the 9th Concession of Township of Faraday.” The area includes Lots # 1 to 36 along the shore of Bay Lake. Surveyed by Garnet Lawrence Berkeley, O. L. S. and signed August 21, 1950.

This copy was made in 1972 of plan #850, as registered in the Hastings Land Registry Office.