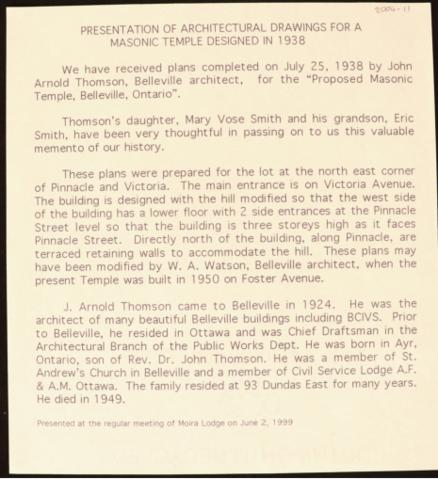 7 architectural drawings (one is framed)

John Arnold Thomson was born in Ayr, Ontario, on March 2nd, 1876, the son of John and Martha Thomson. He was an architect and worked in Ottawa as the Chief Draughtsman of the Public Works Department before moving to Belleville, Ontario, in 1924. He married Eleanor Featherstonhaugh in Ottawa on September 23rd, 1903 and the couple had three daughters. Thomson was the architect of the Belleville Collegiate Institute and Vocational School in Belleville. He died on March 12th, 1949 and was buried in Ayr.

These plans were donated to the Moira Lodge in 1999 by Mary Vose Smith (daughter of John Arnold Thomson) and her son, Eric Smith.