Thomas Cantrell Coxon was born in Manchester, England, in 1886. He married Edith Vitler (born 1891) in Salford in 1913. The couple moved to Belleville, Ontario, in 1915, where Thomas worked as the caretaker for Queen Victoria School for 30 years. The couple bought the house at 300 Charles Street in Belleville in the 1940s. Edith died in 1966 and Thomas in 1977.

Roscoe Vanderwater is considered to be the founder of the Moira River Conservation Authority. He was born near Foxboro in Sidney Township in 1889 and served in the First World War. He held positions in municipal politics in the 1920s. Vanderwater died in Belleville, Ontario in 1957.

The Trent Valley Quilters' Guild was organized in September 1989 by students of Helen Ireland. The group met for the first time on 21 November 1989 at the Dufferin Centre in Trenton, Ontario. Its aim was to promote appreciation and knowledge of the art of quilting and to provide an organization for quilt lovers to share techniques and socialize. By 2009 the Guild had over 100 members. The Guild now meets in Brighton. The Guild's website is at https://www.trentvalleyquiltersguild.com/ . 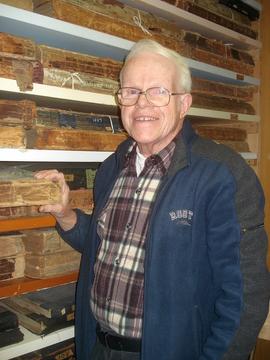 Gerald Egerton (Gerry) Boyce was born in Hamilton, Ontario in 1933. He graduated from McMaster University with a B.A. in History in 1955 and received an M.A. in History from the University of Manitoba in 1960.

Boyce taught for 32 years in secondary schools in the Quinte region. He retired in 1989 to concentrate on research and writing. His many publications include: Historic Hastings (1967), Hutton of Hastings (1972), The St. Andrew's Chronicles (1978), and Belleville: A Popular History (2008). He was a founding member of the Hastings County Historical Society in 1957 and has remained closely associated with the Society and its collections. He was instrumental in establishing the Hastings County Museum and the Community Archives of Belleville and Hastings County and he served as a Councillor for the City of Belleville from 1991 to 1997.

Mary Elizabeth Roberts was born on 7 April 1910, the child of Archibald Alexander Roberts and Elizabeth Gertrude (Kelso). She married Alexander McLean Haig on 26 April 1941 at St. Andrew's Presbyterian Church in Belleville, Ontario. The couple had four children. Mary died in Belleville on 13 June 2004.

Alexander McLean Haig was a prominent figure in Belleville, Ontario in the mid twentieth century. Known as "Mac," he served as alderman, mayor, and was the President of numerous organizations throughout the city. He was born in Campbellford in August 1903, and died in 1975. His parents were Dr. Andrew Haig and Marian Gertrude McLean. He spent time during his youth in Kingston and attended Queen's University. After he graduated from Queen's Faculty of Arts, he attended Osgoode Hall in Toronto where he received his Doctorate of Law degree.

Upon graduation, he moved to Western Canada before settling in Belleville in 1935, and establishing an insurance business. From 1940 to 1945, Haig served as a group Captain in the Royal Canadian Air Force. After the war, Haig opened Moira Fuels.

His first foray into political life occurred in 1940 when he ran as the Belleville candidate for the federal Liberal Party under Prime Minister Mackenzie King. He ran again in 1945. On both occasions he was beaten narrowly. Haig served as an Alderman for Belleville in 1938, 1939, 1940, 1950, and 1951. He was first elected Mayor of Belleville in 1952 when he won by a record majority of 1626 votes. His second stint came when he received the post by acclamation in 1960. He would be elected two more times in 1962 and 1963. He is credited with leading Belleville out of a financial crisis after the McFarlands World Championship Hockey team was implicated in a scandal with the city's Treasury Department.

He was married to Mary Elizabeth Roberts (1910-2004) in 1941. Together they had four children: Trudi Banting, Christine Cox, Andy Haig, and Archie Haig. His known grandchildren are James Douglas and Alan McLean Banting. Haig Road in Kingston is named for him.

Lloyd Syer was the Director of the Parks and Recreation Department in the City of Belleville from the 1970s until 1990.

Ida Ham was born in Limerick Township, Hastings County, Ontario, on 23 October 1877, the child of Charles Baragar and Emily (Lake). She married Thomas Anthony Ham on 29 June 1898 and the couple had six children. Ida was a member of the St. Ola United Church. She died on 25 June 1977.

John Wesley Roblin was the child of John Wesley Roblin and Deborah Ann Rightmeyer. He worked as an insurance agent and was married to Anne Elizabeth Vanblaricom (1843-1917). They had one child, Elmer (1866-1948), who moved to Rochester, New York. John Wesley Roblin lived in Prince Edward County and died there in 1927. He was buried in the Glenwood Cemetery in Picton.

Jessie Cunningham was a resident of Belleville, Ontario. She was born on 24 March 1920, the child of Alexander Cunningham and Janet (Graham Watt). She worked as a stenographer for the Belleville Cheese Company (later Black Diamond Cheese). She lived at 56 Alexander Street and died on 4 March 2010. She was buried in the Belleville Cemetery.

Ryrie Bros. were a Toronto firm of jewellers and watchmakers. See history at https://web.archive.org/web/20220604121952/http://www.silversocietyofcanada.ca/sites/default/files/Ryrie.pdf

Mary Geneva Edwards was born in Deseronto, Ontario on 13 February 1904, the child of Evan Edwards and Harriett (Dunn). She had a career as a nurse at St. Michael's Hospital in Toronto and four children. Her married name was Williamson.

George Wishart was born on 18 December 1896 in Kinburn, Ontario. He studied entomology at the Ontario Agricultural College in Guelph and in 1929 he moved to Belleville, Ontario, to take up a position at the Dominion Entomological Laboratory on Dundas Street. He married Lois Keatley on 5 June 1929 and the couple had three daughters. George was active in a number of organizations and charities, including the Belleville Children's Aid Society, the Moira River Conservation Authority and the Canadian National Institute for the Blind. He served as an alderman for the City of Belleville from 1958 to 1964. He died on 23 February 1970 at the Belleville General Hospital and was buried in Arnprior, Ontario.