William Bates Riggs was a bandleader, businessman, and in 1920, mayor of Belleville, Ontario. Born in Pittsburgh, Pennsylvania on August 17th, 1853, he moved to Belleville in 1881 to become the Bandmaster of the Oddfellows Band, which later amalgamated with the 15th Battalion Band to become the Consolidated and Oddfellows Band. Under his direction for 20 years, it became one of the finest bands in eastern Canada.
He married Mary Priscilla Riggs (nee Nelson), and together they had four children: Leo Bates Riggs, Lester David Riggs, Wanda Elizabeth Riggs, and Vera Riggs (later Lewis).
In 1889, William Bates Riggs became a piano and organ retailer in Belleville, Ontario, also selling other musical instruments and sheet music. As the demand for automobiles rose, he realized their potential, and established Riggs Motor Sales in 1914. His garage and showrooms were successful from the start, and he held the first agency for Ford motor cars in Belleville.
William Bates Riggs was involved in the civic, social, and religious life of Belleville. He served as a member of the City Council for three years, and in 1920 was elected Mayor. He was a Life Deacon of Victoria Avenue Baptist Church, and was Sunday School superintendent for several years. He also served as a choir master for over 30 years. He took an active role in the organization YMCA, serving on its board and as president for 1 year.
William Bates Riggs was also a keen sportsman; he was an expert rifleman, and enjoyed hunting, fishing, and lawn bowling. He died on July 3rd, 1937 in Belleville.

Leo Bates Riggs was born in Pittsburgh, Pennsylvania in 1879 to William Bates Riggs and Mary Riggs (nee Nelson). He studied piano and organ in Toronto under a variety of prominent masters. He was then appointed organist and director of St. Andrews Presbyterian Church in Belleville, Ontario. In 1901, he accepted a position as organist and director of the First Baptist Church in Indianapolis, Indiana. In addition, he taught piano and organ at the Central College of Music in Indianapolis, Indiana. That same year, on August 28th, he married Mabel Kathleen Deguerre, a graduate of the Toronto Conservatory of Music. She was director of the Vocal Department of Albert College in Belleville, Ontario, and after their marriage she joined her husband on the staff of the Central College of Music, in Indianapolis, Indiana, teaching voice. In 1903, their only child, Leona Riggs, was born.
In 1909, the family moved to New York City where Leo Bates Riggs became chief organist and director of music at the Astor Hotel. He performed in concerts throughout New York, and was among the first organ artists to be broadcast over the radio station WBC, New York.
In 1924, he and his wife returned to Belleville, Ontario so that he could assist his ailing father, William Bates Riggs, in his automobile business. For many years, Leo Bates Riggs successfully maintained the Riggs Garage until his retirement in 1954.
Continuing his musical career in Belleville, Leo Bates Riggs became the organist at John the Baptist Church until it burned down in 1936. Leo Bates Riggs also preformed for many Belleville clubs and organizations, as well as belonging to the Rotary Club, and the Kiwanis Club. He was also the president of the Chamber of Commerce, in Belleville, Ontario, for a brief period of time.
Leo Bates Riggs died at his summer residence in St. Petersburg, Florida on January 23rd, 1956, and was buried in the city of Belleville, Ontario.

Leona Riggs devoted her life to music, first as a performer in musical shows, then as a music teacher, choir director, and patron of the arts in her adopted city of Belleville, Ontario. She was born in Indianapolis, Indiana, on February 17th, 1903 to Leo Bates Riggs, an accomplished pianist and organist, and Mabel Kathleen (nee DeGurre) Riggs, a vocal teacher.
Leona Riggs spent her early years in Indianapolis before moving to New York City, where her father was appointed organist at the Astor Hotel. After graduating from Yonkers High School, she studied at the Institute of Musical Art (later named Julliard School of Music) in New York, followed by attendance at the American Conservatory at Fontainbleu, France, ca. 1924-25. Another period of post graduate study followed at the Julliard School of Music in 1928-39. Subsequent to her studies in France, but before she returned to the Julliard School of Music, Leona Riggs toured the United States as a singer in the musical shows "The Vagabond King" and "Golden Dawn," from 1926-28.
In 1929, due to effects of the Depression, Leona Riggs moved to Belleville to join her parents and family, who had moved to Belleville from New York in 1924 so that her father could assist her ailing grandfather in his automobile business. In Belleville, Leona Riggs taught piano and vocal lessons from her home for many years. In addition, she was the choral director at John Street United Church from September 1933 until the church was destroyed in October of 1936. A year later, in 1937, Leona Riggs became the choral director at Bridge Street United Church, a position she held until 1951.
Leona Riggs expended great effort over the years in support of the Arts in the Quinte region; many concert artists were brought to perform before local audiences through the Community Concerts Association. She established a continuing scholarship fund that provides awards for graduating high school students in the Belleville area who plan to continue their musical studies.
Leona Riggs remained single throughout her life, leaving no immediate family behind upon her death in Belleville, on August 11th, 1994.

Bill Stovin was born in Unity, Saskatchewan in 1920 and gained early experience in radio in CHSC, based in the dispensary of his father's pharmacy. He worked at CKSO in Sudbury, Ontario, before joining the Royal Canadian Air Force in 1942, where he served as a Signal Technical Officer in England, finishing his service as a Flight Lieutenant Commanding Officer at RAF Dunkirk in Kent and RAF Fairlight in Sussex. Stovin married Doreen Blackwell (1920-2013), a radar operator, in Cornwall, England in 1945. He was employed as the station manager of CJBQ in Belleville in January 1946, where he worked until returning to Saskatchewan in January 1959. He died in 2011.

Alderville has been home to the Mississauga Anishinabeg of the Ojibway Nation since the mid-1830s. Before that time the people lived in their traditional lands around Bay of Quinte (Grape Island). From: https://alderville.ca/alderville-first-nation/history/

The Belleville Recreation Committee was established in 1949 with oversight of two playgrounds. By 1953 the committee had charge of eleven playgrounds and a number of recreation programs. It became Recreation and Arena Committee in 1966, and later the Parks and Recreation Department and then the Recreation, Culture and Community Services Department.

Clifford Belch worked for the City of Belleville in its Recreation Department, then as the City's first Chief Administrative Officer and, in retirement, he served two terms as a Councillor.

Lord Cultural Resources is a company specializing in planning for the cultural sector. Website: https://www.lord.ca/who-we-are/about

John Harley was a student with an interest in Frankford, Ontario. 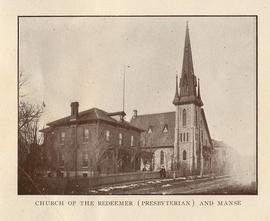 Presbyterian Church of the Redeemer (Deseronto)

The first Presbyterian minister, Reverend Robert John Craig, was appointed in Mill Point (later Deseronto) in 1876. Construction began on a dedicated church building on George Street in Deseronto in 1881.

James Dryden was born in Napanee, Ontario on 31 August 1855. He was a successful merchant in Deseronto and lived in the house to the north of the Post Office on Centre Street, later used as a funeral home. He married Melissa Ann Irvine on 9 November 1881 and they had one daughter, Jennie. James Dryden died on 7 September 1921.

R. J. Graham had a business in dehydrating foods in Belleville, Ontario. He was mayor of the city between 1901 and 1903.