Ranney and Bartley, Engineers and Surveyors

Around 1773, James Peachey worked in the office of the surveyor general for Quebec. By May 1783, he was employed as a deputy surveyor under surveyor general Samuel Holland. He surveyed lots of land for troops and loyalists in Upper Canada. He died on November 24, 1797 likely due to an epidemic in Martinique where he was deployed.

In 1784, Lewis surveyed Adolphustown and Fredericksburgh townships along side D.P.S. James Peachy.

The notes and records of Darrell L. Hume Limited are located with Watson Land Surveyors Ltd.

John Egerton Claydon Butterfield was born on December 27, 1886 to parents Joshua Butterfield and Margaret Morris Dobie , in Halton, Ontario, Canada. He worked as an Ontario Land Surveyor. He died on June 14, 1961 and was buried in the Evergreen Cemetery at Guelph, Ontario.

Michael Joseph McAlpine was born on January 13, 1924. Between the years of 1942-1945 he was a member of the Royal Canadian Air Force (RCAF). Throughout his non-military career he worked as an Ontario Land Surveyor (O.L.S.). His wife was Mary Delphine (nee Steenburg) McAlpine (1934– 2013). Michael McAlpine died on August 12, 2001 at an age of 77 years. He was buried in the Our Lady Of Mercy Parish Cemetery at Bancroft, Hastings County, Ontario, Canada. 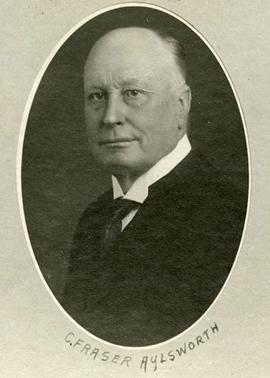 C. Fraser Aylsworth was born on April 21, 1862, in Madoc, Hastings County, Ontario, to parents Elizabeth June Gillespie and Charles Fraser Aylswroth Sr. (a Provincial Land Surveyor).
Following in the footsteps of his father, Fraser Aylsworth was employed as an Ontario Land Surveyor throughout his career. He married his first wife, Minnie Deans on September 21, 1887 at Perth, Ontario. Following her passing in 1906, Aylswroth was married to Louise Victoria Brenton on March 22, 1910 at York, Ontario. He died in Belleville at the age of 77 on December 4, 1939.

John Henry Shaw was born in August of 1867, to parents Daniel and Jane, at Westmeath in Renfrew County, Ontario. He became licensed as an Ontario Land Surveyor and in 1900 he married Elizabeth Ann in Carleton County, Ontario. Throughout his career he worked for the provincial government surveying townships in Ontario and CNR lines.He died on May 12, 1922, at North Bay, Ontario, due to a case of chronic nephritis.

Hermon was born on March 4, 1830, at a farm in Rednersville Township, Prince Edward County, Ontario, to parents William Hermon and Sarah Roblin. He had 8 siblings. His paternal grandparents were "Pennsylvania Dutch," and immigrated to Canada in the 1770s, while his maternal side were United Empire Loyalist settlers. Hermon went to school at Queen's University in Kingston, Ontario. He went on to teach school and eventually train and qualify as a Provincial Land Surveyor. He set up practice in the Counties of Hastings and Prince Edward. From 1882 to 1884, he was employed as Inspector of Dominion Lands Survey.

His first wife was Anne Louise Bolton of York, Ontario (m. 11 May 1861), by whom he had two children, Ernest Bolton and Robert. After her death in 1867, he married Olive A. Jeffs the following year. They had three children: Edward William, Royal Ridley and Roblin Compton. After the passing of his second wife in 1875, he remarried once again. This time he was wed to Mary Doan and produced two more children: Mary Gertrude and Bartle Pierre. After a long and prosperous life, Hermon died of "surveyors stomach trouble" on February 9, 1907, at the farm where he was born 77 years earlier.

Thomas F. Gibbs was born around 1804, the son of Thomas David Gibbs and Agnes Fraser. He became a land surveyor in Kingston, Ontario. He died on 17 April 1893.

William Wallbridge was born on July 13, 1825 to parents Asa Wallbridge and Hannah Every, in Clarke Township, Durham County, Ontario. He received his land surveying license, in Ontario, on January 8, 1853. He died of scarlet fever on February 3, 1863.

John Thomas Ransom was born on August 25, 1889, to parents Giles Sanders Ransom and Margaret Wilson at York, Ontario. He married Lottie Ruth Long on March 19, 1912, at York, Ontario. He was a Provincial Land Surveyor active in Hastings County from the 1940s-1960s. His son, Thomas S. Ransom was also a surveyor in the local area. John Ransom died on October 13, 1962.